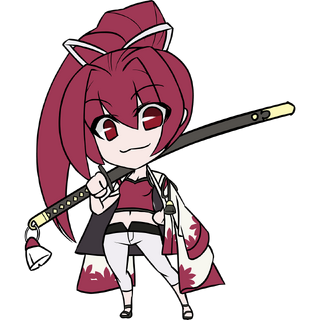 When Yuzuriha enters her stance, you can't press the same button twice. Gauge below the health bar shows you which button you can still use. Pink button is the one you're currently pressing, the one you still can use is colored in blue and the dark one is the button you've already used. Stance-based moves are marked with a star (★) within the move list.

Yuzuriha is a tricky character who fights from long range with the use of her blade, giving her some of the best disjointed hitboxes in the game, as well as some of the best mindgames and abare-hit confirms. She is a rather expanded archetype of the "3-way-delayable-attack" type of character, as she has many different types of various followups from delaying the said type of attack.

You can connect special moves like Bloom to Multi-layer One Ring. Restrain the opponent with swinging Bloom's B version. If you happen to hit, it's easy to connect to another specials. By holding the button after Bloom or M.L.O.R., you can move to her special stance which changes normal movements like dash and jump. You need to think when you need those special movements.

Of course, Yuzuriha in this sense is very strong at match control and zoning with her blade, but is one of the high skill cap characters of the game, so you need to understand her mechanics quite well in order to decently excel with her. Using her poorly can result in her getting easily punished with misused attacks and lack of variety in the hands of a poor player. Get past her boundaries and all sorts of possibilities can be done with Yuzuriha in the hands of a good player, especially a variety of combos and mindgames.

However, aside from her skill cap, she is not without some weaknesses. A notable example is that despite her disjointed hitboxes, her pressure game is lacking from afar due to lack of projectiles, so she's more of a close range fighter regardless. Also, she does not have any meterless reversals outside of her Infinite Worth, so a Yuzuriha on the defensive has some of her options limited, especially since her move list at a more closer glance is also very limited.

Her normals and a few other moves are also rather unsafe on block or whiff, especially if used during incorrect situations during neutral game outside of mid-combo. So despite her agility, this is mitigated by her laggy set of attacks at a closer glance.

In Exe:Late, her D stance was removed from the original game version, until it returns in Exe:Late[st].

Community content is available under CC-BY-SA unless otherwise noted.