Yuzuriha (ユズリハ) is a cheerful young woman whose family is connected to the Night Blade. She roams Kanzakai during the Hollow Night, keeping the peace with her heirloom blade.

She is one of the twelve characters introduced in the original version of UNDER NIGHT IN-BIRTH.

Blade of the Godspeed

A rather dangerous looking girl who wields as blade as tall as herself. She is a descendant of the protectors of this domain, but her family has abandoned that task, with the exception of the single blade she wields. Yuzuriha herself has heard of Voids and the Night Blade, but finds the entire concept ridiculous -- her parents failed to pass on the tradition. One night, she takes the heirloom sword, and heads into the Hollow Night, where all the In-Births are said to gather. Why must she go out tonight, you ask? Well, because it seems like fun, of course![3]

Yuzuriha is a woman who hates trouble and likes to laze around. She is the most recent Protector of the Shrine after her sister, Hiroha, lost her powers.

Yuzuriha is a young woman with long, reddish-pink hair in a ponytail, red eyes and a slightly above-average bust. She wears a fuchsia camisole that leaves her belly button and stomach visible, a light pink jacket with fuchsia flowers at the end and on the ends of the sleeves that hang on her shoulders, white-bright blue skinny jeans that are unzipped and unbuttoned with a unbuckled belt and high heels sandals.

The haori that Yuzuriha wears is made from a traditional cloth passed down her family's lineage, and is traditionally worn when heading out in to the Night. It's used as a good-luck charm when going out to hunt Voids.[4]

Yuzuriha is a very cheerful and carefree, acting like anything that goes on around her doesn't seem to bother her. She affectionately refers to her sword as "Ayame" and her smartphone as "Felia" (both with the "chan" honorific). She is also someone who doesn't hold very serious grudges, having already forgiven Hyde for his actions in the past, as well as telling Hilda to rethink her decision on becoming a Re-Birth in a manner akin to a mother scolding her child.

Despite her seemingly happy-go-lucky attitude, Yuzuriha possesses a serious and realistic side to her. Since obtaining her sword, she has taken it upon herself to be the guardian of the city and killing any Void she encounters and admits that her abilities are far from being perfected. When encountering Hilda, she states that carrying an unconscious Hyde and Linne would be more troublesome than fighting Hilda herself, showing a bold and cocky side to her personality as well.

Yuzuriha's family then started to hold a sword-fighting dojo, from where she was taught her family's sword-style. Around the time, when Hyde went to elementary school, he met Yuzuriha at the dojo. The two have been friends since that point, but their relationship has gotten awkward after a "certain incident", which has left Hyde guilt-ridden ever since.

Yuzuriha's ability, the "EXS of Falling Flowers" (散華のEXS) called Ainsel Lost (). Ainsel Lost increases Yuzuriha's fighting spirit allowing her to reach a state of selflessness which enhances Yuzuriha's senses to several times sharper than that of a normal person[4]. This increases the accuracy and sharpness of Yuzuriha's swift sword slashes. With her sharpened senses, Yuzuriha can read the opponent's flow of EXS and anticipate their moves[4].

The sword she uses is the Iris Blade: Kamiji-no-Homare () of whom she affectionately calls "Ayame-chan", despite her dislike of having to carry it with her all the time due to its size being that of a narrow tachi. It is the traditional sword passed down Yuzuriha's family. It was passed on to the Protector of the Shrine as an talisman to help them cleanse "evil spirits"[4].

Walking Lily Flower♪
This is the final BGM made for the original cast of first UNI.

After overcoming the difficult creation of Hyde's BGM, it was smooth sailing. I kept postponing Yuzuriha's theme and she ended up being as challenging as Hyde. I had a vague idea of applying Japanese image, but it took quite a long time to apply it to the notes and I went through multiple retakes. I barely ended up with the current song just before the final deadline.

Connecting the intro to the refrain riffs, while expressing matureness in the first verse and liveliness in the second verse. And in the refrain a slight hint of prettiness. That about sums up this song.[5]

She reacts. She runs away from her laws and chooses to be alone, living life as she
pleases, bound to no one. Tonight, too, is nothing more for her than a whimsical stroll.
The naked sword is seldom drawn, but when it is, the blade never lies. Everything is
reflected in its clear glimmer... And her true self lies beyond the freedom she attained.
The self she has lost.

She doesn't think. She runs away from her laws, and chooses to be alone, living life as she
pleases, not bound to anyone. Tonight, too, is nothing more than a whimsical stroll.
The naked sword is seldom drawn, but when it is, the blade never lies. Everything is
reflected in its clear glimmer... And her true self lies beyond the freedom she attained.
The self she has lost.

She considers nothing. A rule is escaped and it chooses to be by itself.
Also regardless of whom, it lives as mind is suitable. Tonight is not capricious.
A white edge gazes at a moment. Truth winks. Everything changes for every instant.
Waiting at the point of freedom is real her. Oneself who was lost.

She is thoughtless. She chooses to be herself evading from the statute.
Letting nobody capture her, she lives as the fancy takes her. Only her capriciousness brought her out tonight.
The cold steel gazes at the moment. The principle is a blink. Everything returns to every moment.
The true self awaits her beyond the freedom. The lost self.

Check the details about Yuzuriha's gameplay from here!

In order to fill this lack of character traits, Yoshihara collected various ideas from the development team. That's where he got the idea for a character who used to belong to the Night Blade. Idea behind the character's design was to mix both the past and present. Yoshihara used a combination of jeans and kimono to accomplish.[6].

At some point of development, Yuzuriha was meant to be given a projectile attack which was ultimately scrapped. See more details in Datamine. 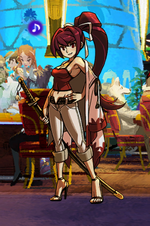