The Immortal Ones, the Void () are invisible creatures who wander around the Hollow Night. They cannot be killed by normal means. 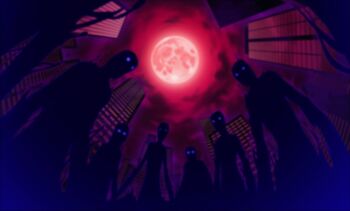 Voids are dark shadows that are incapable of thinking and only move on their instincts to consume Existence.

Voids are can take many different forms, their most common form is that of a small blob of EXS, the stronger ones take the form of snake-like beings and the strongest forms are tall, human-like creatures shrouded in darkness. When a person first transforms into a Void, they remain mostly humanoid save for their eyes turning completely red and seemingly bleeding and their body slowly being enveloped in a black mass as they degenerate further and further, similar to a zombie. There is a side effect when a person being transformed into a Void: the memories of host and his/her people that made relationships with (such as family or friends) will be wiped out completely. In-Births, on the other hand, are the exception, as they have the memories stayed intact when they saw a person turned into a Void.

Normal people aren't able to perceive or interfere with them. Only the most powerful Voids can materialize themselves. Voids also become visible when they get close to high concentrations of EXS, such as the Abyss.

When a person is bitten by a Void, they become able to perceive Voids for the first time. This is also what triggers a person's awakening as an In-Birth. But if the person isn't able to keep their sanity when they witness a Void for the first time, they'll turn into a Void.

Voids cannot interfere with the real world. They only attack those within the realm of Hollow Night. Once the Night ends, the Voids remain in the alternative realm and wait for the next Night. Only the strongest Voids, such as Merkava, are able to access the real world, but only if there is a high enough concentration of EXS.

Void Fallen (虚無落ち) is the specific term used to refer to In-Birth who has turned into a Void. Just like the regular Void transformation, the process of turning into a Void Fallen is also irreversible. It is a rare event, but such has been witnessed to happen to Roger.

There are two ways as to how an In-Birth can turn into a Void:


1. Depletion
If an In-Birth overuses their power in a short period, it is possible to turn into a Void. In this state, the EXS from body is extinguished and the Power of The Void starts to fill and take its place. Once it exceeds a certain amount, the subject is consumed and becomes hostile to all sources of EXS.

Usually the subject goes unconscious from the fatigue before they can reach this state. It is very rare for depletion to trigger a transformation into a Void.

2. Contamination
The Void-like powers that surround the Abyss can corrupt an In-Birth's vessel and overwhelm it with the Void's power. The transformation into a Void takes merely a few moments. However, a contamination-based Void transformation is also very rare because regular In-Births rarely manage to get close to the Abyss in the first place.