UNDER NIGHT IN-BIRTH Exe:Late [cl-r] (アンダーナイトインヴァース エクセレイト クレア), usually shortened to UNIclr, is the third major update for UNDER NIGHT IN-BIRTH, featuring various enhancements to gameplay, as well as adding new content. It released in both Japan and America on February 20th, 2020 and February 21st in Europe for both Playstation 4 and Nintendo Switch, making the series' debut on the latter platform. The PC version was released on March 27th. UNIclr was revealed to be in early access for Amazon Luna on January 21st, 2021 as part of its Luna+ program, and was released for SEGA's All.Net P-ras MULTI arcade cabinet on April 15th.

"Cl-r" shines within the "Exe:Late". The story sways towards its climax! [1]

The game was officially revealed after the UNDER NIGHT IN-BIRTH Exe:Late [st] grand finals of the EVO World Championships 2019 by Kamone Serizawa.

Exe:Late[cl-r] add numerous balance changes, as well as a large multitude of new moves for the existing cast. The update also brings in a new character in the form of Londrekia, as well as an update to the game's gallery, which now features a plethora of concept art, as well as special voice lines. More content is planned for the game series’ next entry, with polls being held to determine what new characters shall be added. The game's online functionalities are also being revamped to implement GGPO rollback netcode, though further details regarding this are currently sketchy.

Both the Playstation 4 version and the Nintendo Switch version sold less than 1700 units on release week. The game was unable to get into Famitsu's "Top 30 Sales Rankings".[2]

■ Fixed a bug which causes character attack imbalances.
■ Adjusted the game balance of some characters. (Detailed changes in this PDF)
■ Improved game stability.
■ Changed replay data version.
■ The game contents may change when replay data created in the previous version is played. 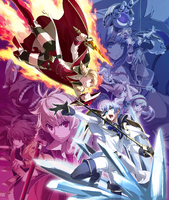 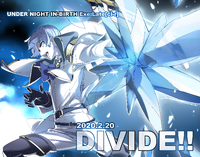