Grind Grid is the gauge located in the middle of the bottom of the screen. It is the gauge that indicates the situation of battle using 12 blocks.

In the middle of the meter is another meter called GRD Transfer State (GRDトランスファーステイト). It is a ring-shaped timer and when its round is full, the player with the most GRD blocks enters the Vorpal state. Grind Grid resets every round and both players start again with zero GRD blocks.

button to gain more GRD blocks. This action at the same time also decreases the amount of opponent's GRD blocks. Concentration slowly decreases you EXS Gauge. It also leaves you wide open, so be careful when to use it.

The player which has the most GRD blocks when the circle in the middle of the meter closes, enters the Vorpal state. During the Vorpal state character gains a blue aura around them and their GRD blocks start to shine. Vorpal state rises the damage you deal by 10% and makes it possible to use the Chain Shift. 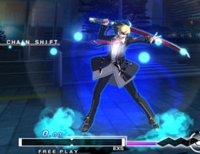 Summary of the Chain Shift

Chain Shift is the most important tool in this game and it can be utilized for both offense and defense. Make sure to take use of it while you're in the Vorpal state.

One block of GRD is worth of 20 EXS, so by filling your own side of the Grind Grid you can gain 120 EXS. However if you use the Chain Shift to cancel an attack, then the amount of EXS you gain will decrease. Also, you won't gain additional EXS by invading your opponent's side of the Grind Grid. EXS worth of 6 GRD blocks is the maximum you can gain through the Chain Shift.

Assault has higher priority than Chain Shift, you make sure not hold the stick/pad forward while inputting the command. 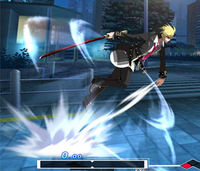 Assault is a so-called "command air dash". Command for the Assault is

. Length of the Assault jump depends a little on your opponent's location on the screen. Assault is one of this game's basic moves to rush towards your opponent. Use of Assault is rewarded with a 1/2 GRD block. Assault has a complete invincibility against throws but it also makes it easy to punish those throws at the same time.

Assault's biggest risk is that you can't do aerial block or Shield during it. Other demerit of the Assault is a so-called "Weakening Compensation Value" which simply means that aerial moves done during the Assault don't deal as much damage as normally. Also, any moves used during the ground version of Assault become completely uncancelable. You'll be left wide open if the opponent blocks your attack in that situation. Of course, this rule doesn't matter with the aerial Assault. This means that when you use the aerial Assault, you can freely cancel aerial attacks and they are all overheads because of the Assault.

If you use wrong type of Shield to block an attack, your guard will break and you'll end up in a GRD Break state. During this time you'll be in serious disadvantage, since actions like Shield and Assault become unusable. Player with GRD Break can't enter Vorpal state even if they had more GRD blocks than the other.

Another typical way to end up in this state is to use Shield when your opponent is about to use Throw on you - this makes you unable to do Throw Escape and at the same time also breaks you GRD. You can also get this state by using Guard Thrust or Infinite Worth EXS attack.

White line between your EXS Enhance and the Grind Grid shows the time left to recover from the GRD Break. Remaining time can be decreased by successfully guarding the opponent's attacks. Activation of the Veil Off also cancels GRD Break, so you can get rid of the status with 100 EXS. 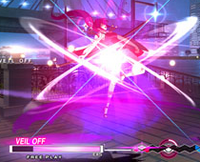 to activate this state which slowly consumes all the EXS you posses at that moment. During this state you can freely use moves that consume EXS. This makes possible for you to combo EX moves with Infinite Worth moves that's normally impossible.

GRD you gain from actions like Concentration and Shielding is also increased during the Veil Off.