This page features all sorts of scrapped ideas French Bread has revealed about the game. 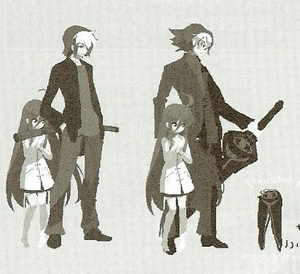 Story was orignally a science-fiction fantasy. It took place in a fantasy world where swords, guns and superpowers were the main weapons. Story was about Hyde and a much younger Linne travelling around the world in order to hunt down the Voids. The only organization that appeared in this plot was the Night Blade.

Game's producer mentions that they had already planned some really dark plot twists for the story.

Hyde was originally much older and his personality was also cooler and more serious. Hyde had met with a very young girl, Linne and decided to protect her. Character designer compares the basic idea of the story to "Lone Wolf and a Cub" where a grown man protects a child on their travels. 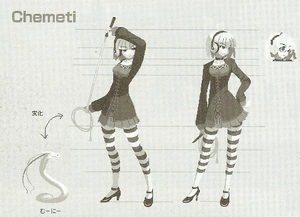 Character designer's comment from Mook:
"You read it as 'Chemeti'. This character was based on idea that Kamone from the development staff gave. Her hearing ability was extremely good, but on the other side her eyesight was low and her eyes were always squinted. She also possessed quite a sharp tongue and highly sadistic personality. Her pet snake would transform into a whip and she was also granted the ability to control waveforms. With those two in her use, she would have whipped her opponents (supposedly). There were certains reasons why she ended up being scrapped."

According to the text on concept sprites, Chemeti's pet snake was called Moony (むーにー)

The game's producer mentioned during a UStream broadcast held on October 10th 2014 that if they overcame certain problems, they surely could bring Chemeti back and add her into the game. And eventually, on May 15th 2015 Arc System Works announced that Chemeti would be added to the game as Phonon. 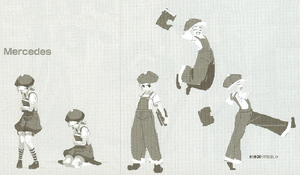 Character designer's comment from Mook:
"Mercedes a.k.a. Mer-chan. At first, he was very shy and timid. His style was to always flee... But how does that work for a fighting game character? So, he was changed into a very cheerful kid. He could materialize things he drew into his sketchbook and fight with them... But he was scrapped because of the adult's circumstances. And yes, Mercedes was obviously a boy..." 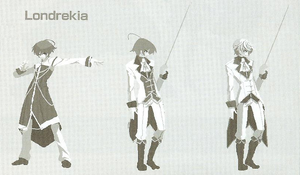 Character designer's comment from Mook:
"His deep blue hair gathers the attention. He has a really strong sense of justice and a serious personality. He is an Executor from the Licht Kreis and wields rapier as his weapon......Huh? Sounds similar to someone? You could call him Orie's predecessor or something. Back then we didn't have that many female characters, but wanted to have more of them. Londrekia's existence was inherited and re-designed into Orie. By the way, his cowlick remains the same."

Character designer's comment from an interview:
"An old habit of mine made me to put some dark elements into Londrekia's backstory. He was representing justice, but was burdened by the deep darkness within him. He fought using an enslaved Void that was covered in restraiments and kept hidden in a coffin. Eye for an eye, Void for a Void... His policy was to revenge by dealing the same damage that the victim had taken. But that would've contradicted with the reason why I created Orie..... Original concept was to have a straight-forward justice character."

Mook only reveals his name and refers to him as a "scrapped character". Everything else about him is unknown. Considering he wields a dragon, he could be some sort of predecessor of Chaos, but there is no confirmation.