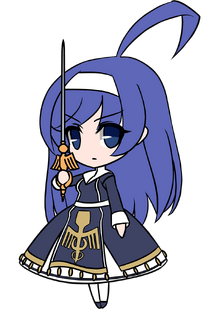 
Orie is a rushing character with fast moves to pressure the opponent, especially adding in the fact that along with Hyde and Linne, she has a well rounded shoutouclone character with the standard anti-air and expansion move scheme, only she lacks a projectile. As a sword character, her rapier is a powerful poking/footsies tool for her normals.

Restrain your opponent with long range moves like Sealing Hoplon and get close to them with rushing moves like Divine Thrust and Dash C. Force your opponent down with variety of normal moves and with the use of Command Order.

Much of Orie's moves are also simple to make use of and are all around with decent poking range and zoning, and much of her moves are very quick and a bit safe on block, giving her good pressure strings and a powerful footsies game at neutral. Her Command Order and Sealing Hoplon, not unlike many avatar characters in fighting games in the past, provides her a ton of combo opportunities, disjointed zoning and okizeme, all with little cost. She also has a decent mixup game with her 6B overhead and her A Command Order which hits low, both which are quick moves.

However, Orie's notable weakness is her low damage to offset her well-rounded moveset, exacerbated further by her lack of full-screen zoning which requires her to often do most of her work in close range (which in turn can make her weak in certain zoning matchups). She also has no chargeable moves other than her B version Divine Thrust, so her damage variety is lacking in that area.

Orie is also solid at maintaining her distance from her opponent in order to reapply her neutral game, since her backdash is a double-layered one that involves a backflip. However, the forced distance may cause her positioning to have difficulties whenever it involves trying to space through normal means outside of using footspeed.

Community content is available under CC-BY-SA unless otherwise noted.