Moves done by holding the stick to a direction and pressing a button. Weak (

). They can be done neutral, crouching and in midair.

Normals with different commands are referred as "Command Normals" (特殊技) and they work the same way as other normals.

During the dash, by inputting

you can do a specific dash attack. Dash attacks can be done immediately before any distance is gained during a dash, so you can surprise opponents with a quick gap close if possible.

A specific chargeable normal attack. After the charge, attacks usually get new properties, like deal more damage or causes a knockdown. Charging takes some time so you need to find the right places to use these moves.

to use character specific move. Move consumes 1 GRD block, but can be used without any GRD.


Force Function is counted as a a normal move. It can be used to cancel normals, but not specials.

and pressing a button. Most of the specials have normal

versions and a special EX version which is done by pressing

All damaging special moves inflict chip damage on the opponent when blocked, which is a small amount of damage per hit landed from the blocked special. 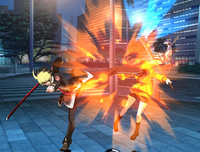 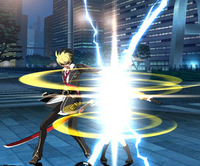 A throw can be done close to the opponent by pressing

. Throws can't be guarded, but the opponent has a small chance to escape from them. Throws are an important tool to break the opponent's defense. It's possible to throw the opponent backward with the motion

motion results in a forward throw.

Throws have small reach, but are fast moves that are optimal to opening an opponent's defense if they are skilled at blocking. Throws are all 1 frame faster than moves like Hyde's

. Throws always win then they clash with the opponents move due to special hitbox properties. They have a start-up of 4 frames.

Eltnum and Akatsuki are the only characters in the game who possess an Aerial Throw (空中投げ).They are done while in midair to an opponent in midair, and cannot be escaped.

You can cancel A normals to throws. But if you try to throw an opponent while they are still blocking an attack, a golden effect flashes and the opponent's chance of escape extended to 29 frames. These are referred as Gold Throws. Command throws, like Gordeau's Assimilation also become gold throws when used against a guarding opponent.

You can extend the reach of the throw by using it after a dash. Input dash and hold down the

button, and when you get close to the opponent press down the 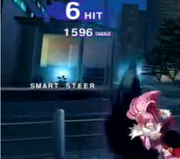 Smart Steer is a system which automatically connects a simple combo of character's moves. Screen tells with a text "SMART STEER" when someone uses this Auto Combo.

But you can do this by mashing

Passing Link is a system which makes it possible to cancel a normal move with another normal move. Passing Link works whenever the a move hits the opponent, even if the move is guarded.

You can freely mix standing and crouching moves. Passing Link works from weak move to the stronger move, like 5A→5B→5C as well as from a strong move to a weaker move, like 5C→5B→5A. You can't use the same move more than once during the Passing Link (with the exception of some repeatable moves).

Smart Steer is not affected by Passing Link's restrictions. This means you can use moves included in Smart Steer combo two times in a combo, like in this Hyde's combo:

) attack, then it becomes a High Counter.

If you deals a Counter hit during Assault, damage compensation value will be nullified and you can actually deal pretty good damage even if you hit with a light attack.

Counter hit can also change the opponent's recovery options. For example, Vatista's Dash-B slams the opponent on the ground, If you counter with Seth's "Segment of Stitch Binding" or Gordeau's 2C, the opponent becomes unable to air tech.