The Night Blade () is an old organization that has protected the order of the Hollow Night for years. 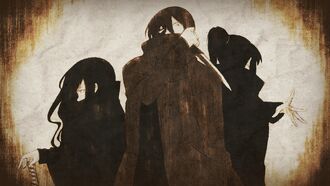 About 500 years ago[1], the Hollow God visited the Witchcraft Village and taught the people about the powers of EXS. After this, many of the surrounding villages started to get curious about the happenings of the village. The village chief decided to create a group in order to protect the secrets that the Hollow God had taught them. Linne mentions that the group was named "The Sword Concealed in the Hollow Night" (虚ろの夜に伏す刀).

They protected people from the Night for ages and passed on the knowledge about it through generations. However, an internal struggle begun within the Night Blade. The faction separated into two subgroups: The Reformists; who desired to protect themselves from outsiders, making the presence of the Night Blade known in the process, and the Moderates; who wished to continue living in secrecy. Some remains of its members still continue to fight Voids and protect the Night. The Reformists were lead by the Sougetsu Clan, who ended up moving away from the village and became the guardians of the Shrine of the Protector, while the Moderates stayed behind, continuing on the Night Blade's legacy.

Currently the size of the clan has grown quite small. The Night Blade now has a little under 100 members[2]. Some of those members have stopped participating in the Hollow Night, and only a handful take part in their usual Void suppression activities.

In the past, the Night Blade owned a mansion-like building that used to serve as their headquarters[3], but it is no longer in use. Most of their members and clans live separately and operate on their own.