Details about the game modes in UNDER NIGHT IN-BIRTH. 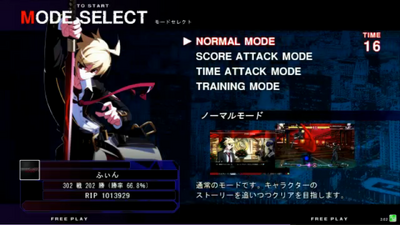 Menu of the arcade version looks like this. If you're playing with an Aime card, your card information will be showed in the left corner.

Normal Mode
You'll play through 10 fights and witness the story of your character.

Time Attack Mode
You'll play through 10 fights and try to finish it as fast as possible.

Training Mode
With one coin, you can freely train for a specific amount of time. Arcade machine's settings determine how long the time is. By pressing the START button during this mode, you can bring out a menu screen. 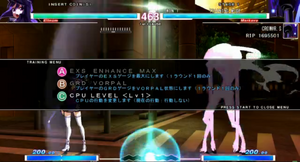 EXS ENHANCE MAX Fills player's EXS Gauge to maximum. (Once per round)

GRD VORPAL Give's the player a Vorpal status (Once per round)

CPU LEVEL <LV 1/2/3> Changes the movements of a CPU opponent. 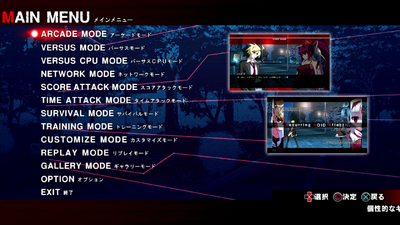 Menu of the console version looks like this. Use the Circle button for confirm and the Cross button to return.

Arcade Mode
You'll play through 10 fights and witness the story of your character. Same as the "Normal Mode" from arcade version.

Versus CPU Mode
Offline battle mode for one player to fight against CPU opponents.

Time Attack Mode
You'll play through 10 fights and try to finish it as fast as possible.

Survival Mode
You'll continue the fight as long as you can. Your character's health won't recover between the fights.

Training Mode
Practice your combos and stuff...
Console version Training Mode is told to be able to record actions for the Dummy to repeat on command. 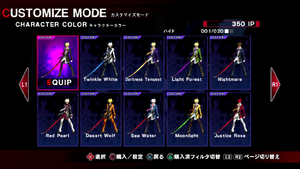 Customize Mode
These settings only apply to the Network Mode. You can pick up a title for yourself, change your profile card and select a default color the game always gives to you... but of course, you have to buy those first from this same menu. Prices of the items are the same as they were in the In-Birth Front.

Replay Mode
You can watch Replays of your Network matches here.

Gallery Mode
Collection of illustration, movies and voices. You need to unlock stuff with your "In-Birth Points". 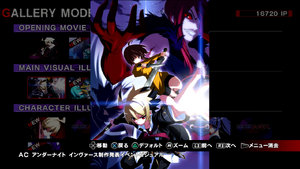 Option
You can change the strength of CPU opponents and various other settings, but further details haven't been given.