Under Night In-Birth Wiki
Register
Don't have an account?
Sign In
Advertisement
in: Characters, Female, Playable Characters,
and 2 more

"Very well... We are the will of the 'Night Blade'.
I will traverse a mountain of corpses, if I must."

Linne (リンネ) is the deuteragonist of UNDER NIGHT IN-BIRTH and Kuon's younger sister. She is an immortal being who wishes to end her cycle of reincarnation.

She is one of the first twelve characters introduced in the original version of the game.

The mysterious girl who appears before Hyde.

A lady, young only in appearance, and the heroine of this story. She saves a high school student from being consumed by a Void, but cannot save him from turning into an In-Birth. After discovering his awakened powers, however, she asks for his help, "Use that power of yours, to end my life --". But before he can grant her wishes, a woman claiming to be the leader of "Amnesia" leaves them with a cryptic message. "I'll be waiting at the Abyss on this Hollow Night, Princess."[3]

Linne has long been searching for a legendary sword known as the "Indulgence of Insulation" to end her eternal life. Quick-minded and stoic, Linne is someone who works well at her job and is focused on her goals, not letting her emotions get in her way. She is always accompanied by her pet Kuu.

Linne's current appearance is that of a young girl with brown hair and brown eyes. She wears a yellow hoodie over a black shirt that goes up her neck, black spandex shorts and black zipper boots up to calf-length. Her clothing can change depending on what color palette the player chooses. For example, she'll wear thigh-high stockings, spandex pants or just nothing but the hoodie.

Linne is a stoic, aloof, and independent girl who tends to try resolving matters on her own regardless of how dangerous the situation is.

Underneath, she possesses immense guilt over how, because of her ability, she has destroyed the lives of countless innocent girls, believing that only her absolute death can cease this endless cycle. Even though Hyde possesses the means to give her a true death, she feels even more guilt on how she must ask him to bear the burden of killing her on his conscience.

Linne's stoic shell can also sometimes be broken under certain means. Perverse gestures can quickly anger her and she is easily swayed by food, especially candy and other sweet confectioneries, which is the result of the more childlike tendencies of her body taking effect.

Hundreds of years ago, Linne and her brother Kuon were used in the Night Blade's human experiment to create new abilities. As a result Linne gained a power to transfer her consciousness from a body to another - making it possible for her to live eternally. In addition, if her host body gets killed then Linne's consciousness is automatically transferred to a new body. This is how she has lived her life for several tens of bodies.

Linne didn't want to continue possessing and ruining the lives of unknown girls, so she searched for a way to end her eternal life. The answer Linne found was that a legendary sword called the Indulgence of Insulation could rend her existence apart and end the curse she is bound to.

Ever since the next "Hollow Night" a boy named Hyde Kido was being attacked by the creature called Voids. Ever since then Hyde became a In-Birth being able to wield ‘Indulgence of Insulation" making him have the ability to kill Linne.

Linne can wield the EXS of Agility (疾駆のEXS): Speed Star (スピードスター), which, naturally, gives a massive boost to her agility. Interestingly, the ability actually belongs to the body which Linne is currently possessing, meaning that Linne has most likely used other abilities in the past. It is a fairly average ability, which only boosts body functions.[4] Linne also likes to mention her ability name often to evade suspicions of actually being the Princess of the Night Blade. 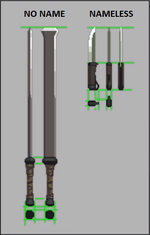 Linne fights using a combination of a long sword and a folding knife. The long sword is called No Name (無銘), a dull grey sword with a brown hilt and wrappings which has almost no sharp edges, leaving it nearly completely blunt. It was forged by Linne herself a long time ago, having received tutorage from Waldstein, who is known for his knowledge on weapon smithing.[5] Linne hasn't thought up of a name for the sword yet, hence the sword's current "name".

The folding knife she uses is a regular knife that can be sold in an ordinary store. It's referred to as Nameless (名無), simply because Linne has yet to give the knife a name. Linne chose to use a knife because it's light and easy to use in tandem with her small physique.[4]

Most of Linne's combat prowess comes from her years of experience and good gut feeling.[4] She can read her opponent like a book and disorientate them with dodges and other evasive maneuvers, and slowly whittle them down. In order to make the most of her ability, she only uses the two weapons she has on her and nothing else. Linne also states that she likes to yell out the name of her attacks during a fight as it supposedly helps her bring out as much power as possible from her small body.

During some of her most strongest moves, Linne channels some of the power contained within the Seal engraved within her soul. This power envelops her blades with a bright light.[4] Linne can either use her weapons in tandem with this, or she can merge them into one blade.

Night Walker
If talking about the order of creation, I think this was created right after Hyde's theme or after the next one after it.

When seeing her visual, I was like "It's gotta be the piano". So I started by creating the arpeggio at the beginning. Melody is pretty serious, expressing something that is suppressed within her chest. This song is pretty complex, so I certainly didn't expect it to became one of the most popular songs in the game.[6]

She repeats. To unearth the truth behind her eternity and settle a score with her brother.
The sword she sought and the encounter with its wielder... Therein lies the path that will
change her fate. The rusty cogs begin to turn once more, their ripples
beckoning her to the end of her tale.

She repeats. To unearth the truth behind her eternity, and settle a score with her brother.
The sword she sought, and the encounter with its wielder... In there lies the path that will
change her fate. The rusty cogs will begin to move once more, its ripples,
beckoning her to the end of her tale.

She repeats. For a conclusion with the source of old eternal cause and effect, and an elder brother.
The sword for the first time is one for which it has searched long.
Encounter with the holder. Conversation of the stagnant fate.
The rusty gear makes the sound which is the surroundings heavily and creaked.
Probably, the ripple shows the last arrival of her tale soon.

She repeats. For the origin of ancient eternal fate, for the settlement with her brother.
Her long sought sword. An encounter with the owner.
The conversion of stagnated destiny. The rusty gear wheel starts to slowly spin and creaks.
The consequence will soon indicate the terminal of her story.

Something by which her ability seems to be a girl friend
and finds much freedom.
She's freed from a large number of chains.
The sky is danced, a place, the ability which runs freely will be
big help of her war.

Check the details about Linne's gameplay from here!