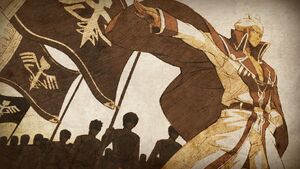 After the leader of Licht Kreis, Adelheid, had received information about the mysterious "Witchcraft Village" that resided in an eastern island country, she immediately moved to put together a search team to confirm this info.

Adelheid put one of the strongest and one of her most trusted warriors of Licht Kreis, Waldstein, in charge of this operation. Their intent was to gain control of this "witchcraft" before such force could be set loose into the world. Even if it meant forcing the whole country into submission.

Instead of immediately resorting to using force, Licht Kreis first contacted the village with the idea of reaching a solution by talk. However, the village didn't accept their conditions. Eventually, Licht Kreis saw no meaning in further talks and resorted to getting them to submit via forceful means.

The Witchcraft Village had already prepared their very own combat faction known as the "Night Blade" for fights against fellow "wielders". Neither side wanted to cause casualties for the other side, so affter a few skirmishes, the two two factions decided to settle their conflict by pitting a representative of their respective factions against one another. The leader of Licht Kreis' operation, Waldstein, was very accepting of this decision and volunteered himself. The young warrior Kuon was chosen to represent the village. 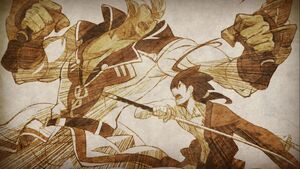 The match was even, but the enormous amounts of EXS that was gifted to Kuon by the Hollow God was what eventually led to him being declared the winner of their duel. Waldstein had been defeated. With his last remaining strength, Waldstein tried to destroy the Vessel within Kuon, but was unable to do that. Waldstein's attacks did manage to cause a large amount of EXS to leak out from Kuon's Vessel. However, this high concentration of EXS soon started to make it's way into Waldstein's own Vessel. Waldstein's body started to transform into a monster that continuously consumed EXS; a Void.

It pained Kuon to see his opponent in this kind of state, but there was little he could do. However, a mysterious, angelic being who had been observing the situation decided to intervene by giving one of her wings to Kuon as a weapon capable of nullifying EXS. With it, Kuon was able to cut through the EXS flowing into Waldstein, saving his life, but leaving him in a partially transformed state. 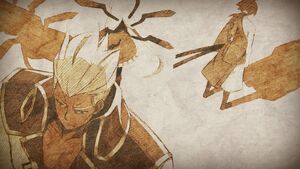 Waldstein was moved by Kuon's chivalry. He thought that he couldn't return back to Licht Kreis after failing his mission and turning into a Void. Deciding to defect from Licht Kreis, Waldstein used his last moments as a captain to order all of his troops to retreat from Japan and never return, while he remained and joined the Night Blade.

Adelheid was absolutely furious when she heard what had happened from the returning troops. She eventually reached the conclusion that "men cannot be trusted" and ended up changing the entirety of Licht Kreis' inner workings as a result of this incident, ordering all men in the organization to leave and making it an entirely all-female group