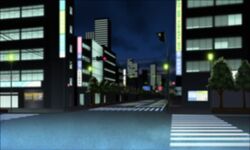 Kanzakai (), also known as "The Nightless City", is the name of the town where the story of UNDER NIGHT IN-BIRTH takes place.

Kanzakai is a rather quiet town in Japan located near a group of mountains. It is the homeground of the Sougetsu family and also has some historical remains from long ago from when the Night Blade resided. Some of its notable buildings and areas include:

Despite the brightness and overall positive air of the city, it still has its share of shady activity. One of the more seedy parts of the city features a bar that acts as a headquarters for members of Amnesia.

Kanzakai has recently become a topic of interest for recently having a high influx of In-Birth and Void activity. Both Linne and Waldstein travel here in order to investigate both this and the reports of a woman calling herself Paradox. Licht Kreis has also done so, having sent a handful of Executors to investigate this surge in activity, with Ritter Schild not too far behind. It is the the home-town of the faction known as the EFG, a stundent-run faction that has ties with multiple schools in the city.