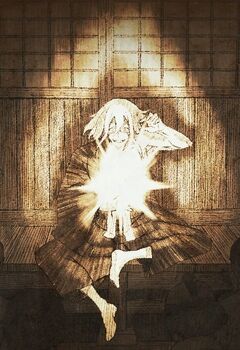 The Hollow God () is a key figure in the history of the Hollow Night and is said to have been the first ever In-Birth.

The Hollow God was a mysterious young traveler who arrived, starved and dirty at a small village in the past and was cared for by the villagers. As a means of repayment, he showed and taught them a strange form of magic. However, a few days later, he vanished, never to be seen again.

The Hollow God is a scruffy looking young man with a skinny yet somewhat toned body and long, unkempt hair. He wears a long robe that reveals the left side of his chest.

Episode: Nighttime Void (虚ろの夜語り)
Years in the past, a man ridden in filth arrived at a small rural village in the countryside of Japan. This man referred to himself as the "Hollow God". Despite being starved, this man only ever demanded food once during his stay and made it clear that he had nothing to trade. The villagers welcomed the man and invited him to a feast in his honor. Grateful for the villagers generosity and kindness, the man gathered the villagers together as a means to repay them.

He took a small doll and somehow managed to make it move, he called this magic "Existence". Amazed by his power, some villagers asked him to teach them the same, while others called him a messenger of demons and ran back into their homes, frightened. The man agreed, telling the curious that they too, can use these powers. One young man stepped forward and asked to be the first one who received these powers. The Hollow God obliged and slapped his hand across the boy's back. When seemingly nothing happened, the boy suddenly fell unconscious and awoke a few moments later, feeling different. He found himself being able to use the magic that the Hollow God demonstrated earlier, to a weaker effect, being able to simply rustle some tree branches. The

Hollow God explained that the more the boy progresses, the stronger his powers would become. Curious, more villagers approached him, asking for him to bestow his power onto them too.

The Hollow God soon became treated as one of the villagers and was offered a place of residence in a corner of the village. As the villager's skills with this mysterious new power improved, the Hollow God also passed down his knowledge of medicine. Life in the village improved under his guidance and the Hollow God was praised by the villagers, though he would never boast. However, a few days later, a few of the villagers visited his residence to offer him food, only to see that he was gone. Search parties were sent out to look for him, to no avail in the end. Those who had last seen him said that they simply saw him going out for a stroll.

No one has heard about him ever since.