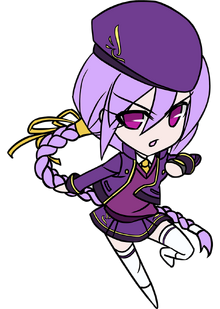 Eltnum's pistol has gauge of 13 shots. Bullets are consumed when you input the command for the move. Game forces you to do Reload if runs out of bullets. Normal bullets are white, used bullets are black and reinforced bullets are purple. Eltnum is also one of the two characters in the game who possesses a midair throw move, carried straight from Melty Blood.

Eltnum is a speedy standard character who can fight well on any range, but her primary duty is to rush into the opponent's face and land a ton of gimmicky whip combos.

She has a bullet-limit on her shooting moves. Shoot Hollow Point at your opponent and then get close to them with her very fast dash and crush their guard with normal moves. 6B is a very effective overhead. You can also use Cutting Sync's A version to get behind your opponent. Etherite Ground, with long reach is a good to pick at long range.

A majority of Eltnum's gameplan is not much different from her predecsor, Sion Eltnam Atlasia pre-Melty Blood: Actress Again (playing like her Crescent Moon Style for any Actress Again veterans, or as her usual base-self in older games), being a high reward character with a ton of execution needed. She is a very strong rushdown character with a bit of zoning with her gun, though it needs to be managed well. The reward is often high damage from many of her combos.

However, she relies very much on okizeme more than any other character, and if momentum is lost with her, she can be in trouble. Along with her tight execution, low reach on most of her moves, weak mixups, and easy-to-drop combos, Eltnum requires a dedicated offensive mindset, and is a bit of a risk, though most of her problems in Melty Blood as Sion may have been fixed as Eltnum in Under Night In-Birth.