Blocks an attack from the opponent by holding the stick to opposite way. Crouching, standing and aerial blocking are possible. Some attacks can only be blocked with one style on blocking, so you need to know when to change your blocking stance.

Blocking any damaging special move will make you take "chip damage" which is a small amount of damage per each blocked hit. However, even if your health is nearly gone, "chip damage" cannot K.O. your character.

button while guarding for a more powerful form of blocking.

During the time Shield is active, the user is unable to do Throw Escape. If you get throw in a situation like this, it'll automatically result GRD Break, so be careful. 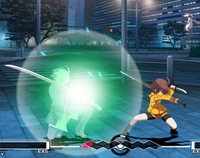 Guard Shield is an action where you input the Shield command while you're already blocking attacks from the opponent. This move uses 10 EXS and Shields the next move the opponent does after you input the command. 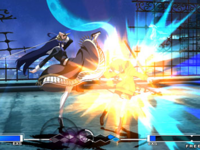 Guard Thrust is an invincible guard cancel move you can use while blocking an attack, which is a standard guard cancel mechanic.
It is done by inputting the command

There are two ways to activate the move: 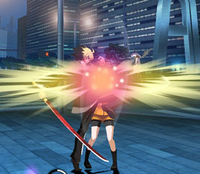 You can escape from a throw by pressing

during a 14 frames long chance before the move is executed. After you've escaped the throw your character takes distance to the opponent and the text "TECH HIT" is shown on the screen. You've also given 8 frames of advantage before the opponent can move, and a small GRD bonus from a successful escape.

Throw Escape isn't possible during the recovery frames after an attack, meaning the opponent is free to throw you if you happen to miss a move with lots of recovery. Also, after you input the command of Throw Escape there's a small period when you can't Throw Escape. So, you need to be careful not to input the Throw Escape too early, or you'll lose your chance to escape. Throw Escape is also not possible while using the Shield. 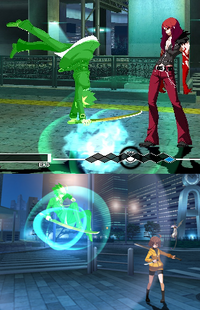 while in the opponent's combo. Text "RECOVER" is shown on the screen when it is used.