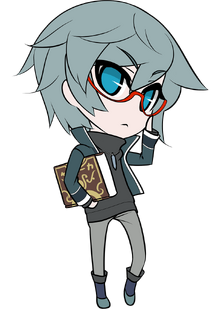 Health: 10801 (Originally 9800)
Play-style: Offensive, Footsies, Pressure, Frame Traps, Tandem Attack, Rekka (Azhi Dahaka only)
Dash Type: Run
Specialty: Azhi Dahaka
Chaos controls a giant lizard and has a specific gauge limiting its use. When the icon is green, you can freely order the lizard. When the icon is red, Azhi Dahaka is either in the middle of a move or still recovering from previous move. When Azhi takes a hit, it disappears from the screen and the icon turns black. You can't use Azhi during this time. Icon recovers back to green after few seconds. Damage inflicted onto Chaos via getting rid of Azhi is negated whenever in Vorpal state, as well as the ability to whiff cancel any Azhi-based move into another one.

Chaos is technical character who fights together with a lizard called Azhi Dahaka. Chaos uses a variety of decent pokes for footsies while the rest of his special moves all are commands for Azhi Dahaka. In a sense, Chaos is a type of avatar fighter who relies on disjointed zoning and powerful tag-team offense.

You can cancel Chaos' normal moves to Azhi Dahaka's orders and cancel Azhi Dahaka's orders to Chaos' normals. Take advantage of this rule and assault your opponent with waves of attacks. Also, most of Azhi Dahaka’s special move orders has a very unique rekka mechanic, such as allowing to cancel used EX moves as well than just used special moves to unused specials/EX moves outside Infinite Worth or Infinite Worth EXS moves (for cancelling the used EX to unused EX then IW or IWS can only be applied on Cross Veil Off with extra careful).

Chaos has a good amount of match and space control at his disposal due to mechanics involving Azhi attacking at unexpected moments, making him solid at punishing some attacks. He also packs a good damage output and decent zoning on his own, with moves such as his 6C Code Reflect move and a ton of offensive capabilities giving him with Azhi Dahaka at his disposal: frame traps, okizeme, mixup and crossups.

However, Chaos' technical playstyle requires good judgment and solid spacing, so he can be hard to use, especially because his non-Azhi moves aren't too good (exacerbated further with much of the weapons-based cast) as his footsies game is one of the weakest. Despite his good mixup with Azhi, his normals on the other hand don't give him much to open up his opponent's defenses. His spacing also needs to be spot on with moves like his Code Reflect and having Azhi being close to Chaos at all times; too far behind with Chaos taking the lead is never an ideal position.

Of course, when he focuses on any offense, technical or not, he forefits the assets of meterless reversals, so when forced on the defensive, Chaos can have a hard time trying to have some breathing room as Azhi is useless without Chaos being free to give commands.

His standard offense also notably a bit weak without Azhi, despite his combos being decent as he has no grounded overheads for mixup; from there, like with certain avatar characters in other fighting games, Chaos' "avatar" can be hit to disable its use for a while, severely cutting off his options and making sure Chaos has good control over Azhi's movements.

A notable thing to keep track of is Chaos' relation to Azhi; certain recent avatar fighters can both be hit by a single attack, meaning characters can hit both Chaos and Azhi Dahaka like so. Also, should the one be sandwiched in between the two, blocking position and orientation is based on Chaos' position from his opponent, and not Azhi Dahaka's, meaning just by moving away from Chaos to block normally, one can also block Azhi's attacks as well, even if the lizard attacks from behind.