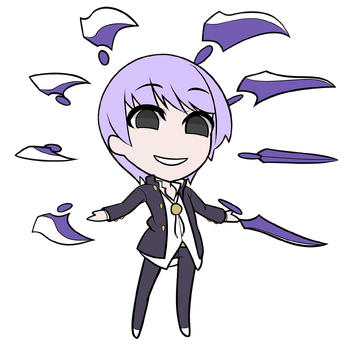 Byakuya can leave his spider webs on the screen. The opponent gets caught in webs by touching them.

Byakuya is an agile fighter that specializes in aerial based play, setting up his web traps and waiting for his opponent to get caught in one to go in for the kill, akin to a spider.

On the ground, Byakuya dominates the mid-range. At mid-range 2B is his go to poke as it hits low, covers a great amount of space, and makes for a great combo starter. He also has access to his command normal 3C which if charged can double as an anti-air and an overhead. At close range, while still very much a threat, the use of his specials at this range can leave him open for punishment if the opponent is ready for the opening.

Formerly a unique trait of Gordeau's, Byakuya also has the ability to drain the GRD of an opponent. Should an opponent dispel Byakuya's webs or get captured in one, they are instantly robbed a portion of their GRD gauge while gaining a portion of it himself. Through a combination of this trait and his ever aggressive playstyle, Byakuya is able to go entire rounds being the only one with Vorpal Status and never running short on meter.

Byakuya does sit with the weakness of being one of the few characters in the game without a projectile or long range option of some kind bar his webs, also being susceptible to projectiles when laying out his webs. As he also lacks a true reversal of any kind outside of Veil Off and his Infinite Worth EXS, if Byakuya is the one being pressured, it can be a bit difficult to escape without knowledge of the opponent's strings.

In the end, Byakuya is a very straightforward type of character whose primary strength lies in smart and proper usage of his web traps and his various movement options. While not packing the long reach of most of the rest of the cast, his ability to close the gap and punish off of even full screen web captures is second to none.