The Automated Nerve Circuits [Autonomic Nerves] () are man-made weapons created to combat the Void and watch over the Hollow Night. 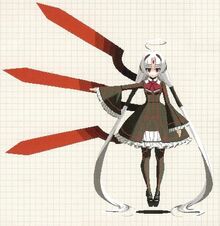 Autonomic Nerves are doll-esque automatons dating back possibly a millennia that have been assigned to watch over the Night by a currently unknown master. Autonomic Nerves are based on the same technology as the mythical beings known as golems, in the sense that they are artificial bodies infused with a human soul. During the time they were created, magic was commonly used by people. It is told that most of the units were destroyed by In-Births. Judging by Vatista's unit number, at least 10 000 units must have existed at some point in the past.

According to Vatista, only three units including her are currently active. One of the other two units is in the custody of Licht Kreis and is currently being repaired by Lex Bartholomeus.

Autonomic Nerves spend most of their time in a sort of stand-by mode and moderate the situation of the Hollow Night without being directly involved. If a Void or an In-Birth tries to consume too large amounts of EXS, these units awaken and are ordered to exterminate the ones who disturb the Night. During the time that they are activated, they can fight without food, sleep or clothing. Once they finish their mission they usually receive the Completion Command titled "Exit Call" () and return to stand-by mode.

Every Autonomic Nerve is equipped with a Decision Control Type Unit (意思制御型ユニット) known as an Aegis-Attributer (エイギスアトリビューター). It's the type name for the red wings each Autonomic Nerve has on their back. Vatista's wings are the 7th type called Crimson Wing: "Seven Flowers" (紅翼:七花). It's unknown how many types there are in total. Autonomic Nerves share a possible symbiotic relationship with their wings and become weaker should they be separated from them, as seen with Vatista when she lost one of her wings during the Licht Kreis War.