The Spiral of Oblivion [Amnesia] (), is a newly founded organization by a group of In-Birth wishing to gain more power and freedom.

Amnesia is an organization which seeks to free the Hollow Night from the control of Licht Kreis and the Night Blade. Amnesia is lead by select number of Executives (幹部), but the rest of the members don't have any kind of hierarchy. Members are expected to act according to the Executives orders during the territorial battles, but normally they have no control over what its members do. Most of its members usually act under their own self-interests. The total number of their members is about two hundred[1].

They have a headquarters set up in a skyscraper. The Executives use it as place of operations. The organization's leader, Hilda, also lives in an apartment in the skyscraper. About the half of their members actually visit building to communicate with the Executives. It is rumored that their operations are funded by some very influential people who have their sights on the power of EXS [1]. 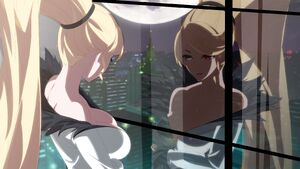 Amnesia was founded by three In-Births; Hilda the Paradox, Gordeau the Harvester and Roger the Survivor. The organization quickly became infamous within the Night for their goal of freedom in using EXS, but word only got around of it when they started taking on rival factions within the Night.

They quickly became the most popular and powerful group in Kanzakai outside of Licht Kreis when they defeated the rival faction Bankikai in an intense battle. However, they ended up with a major casualty in the form of Roger, who was killed after being turned into a Void Fallen. In response to this, the normally anarchic Amnesia ended up setting two important rules: